This week, the London Transit Commission asked the city for a boost to its annual budget. This is a needed investment, with nearly two thirds of the increase going directly to expanding service for transit riders.

I know there are some who will question any increase in city spending, and especially spending on transit, given some of the divisive rhetoric on investing in rapid transit during this election campaign. Let me share why I believe this investment is important.

A close friend of mine has a sister who works in a retail position at Masonville Place, including many Sunday shifts. Currently, LTC service begins at 9 AM on Sundays. That may not sound like a problem, since the mall opens at 11 AM, but my friend’s sister is routinely required to be at work before the mall opens for staff meetings or to set up display materials. When this happens, this otherwise independent woman in her 30s must rely on my friend or their mother for rides to work. In today’s economy, there are many people in similar predicaments. 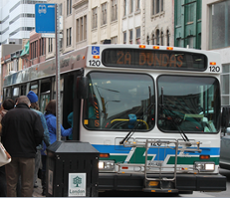 The LTC service expansion already planned to start in September 2018 (next week!) will add 24,000 more hours of service to the system, including shifting start times on a dozen routes to 7 AM from 9 AM on Sundays. The requested budget increase will add another 17,700 hours in Fall 2019, including bringing the remaining Sunday routes to a 7 AM start time.

This move will make a big difference for my friend’s sister, and many others who work on Sundays. But what about workers in industrial areas of the city where there are currently no bus routes, or where even 6 AM to 12:30 AM weekday service doesn’t fit with their shifts’ start and end times? The LTC is working on solutions for these riders. One fact of life, though, is that when you expand service to lower ridership areas, including industrial parks and subdivisions, those buses cost more to run than higher-volume routes in the core, simply because there are fewer fares being paid for each trip. That means the city has to be willing to cover a bigger share of the cost.

Providing these kinds of services to its residents is exactly a city government’s job – especially when the private sector may not see it as worth their while. I’d like to see the expansion of service hours go further, to cover more situations where travellers have few options: for example, pushing the end of system-wide service to 2 AM, and providing 24-hour service to the London International Airport.  Taking a cab at 5 AM (if you can get one to go to the airport) and having it cost you $40 or more isn’t a sustainable option for frequent fliers.

In this week’s news article on the requested budget increase, my opponent in Ward 6 expressed concern that the increased funding wouldn’t lead directly to increased ridership, and therefore revenue. Respectfully, that isn’t the only goal here.

Improving service isn’t about immediately increasing revenue – it’s about making sure Londoners have options to get around, and access to transportation when they need it. Some routes will always be lower volume and generate less revenue (in the form of fares) than others. That’s exactly where public transportation options are needed the most, since private carriers may decide certain routes aren’t profitable enough, or charge rates that are prohibitively expensive for riders in lower volume areas. It will also take time for people to learn about new routes and schedules and to build trust that the service is a reliable option for them.

I’ve shared in the past why I think the rapid transit plan is a good move for London, but this system won’t arrive overnight. There are several years to come of detailed design, property acquisition, and phased construction, one leg at a time. In the meantime, we must keep working to ensure that Londoners can get to work, medical appointments, home again, and connect to other modes of transportation. The LTC’s plans are a step in that direction.