Skip to content
Earlier this month, my two-year term as president of the London Region branch of Architectural Conservancy Ontario (or ACO London for short) came to an end, and I felt it would be worthwhile to reflect on that time.  ACO is a non-for-profit organization with 25 branches across the province with a mission to “preserve Ontario’s architectural and environmental heritage by helping communities and owners preserve buildings and structures of architectural merit, and places of natural beauty or interest“.
During my tenure as president of ACO London, I learned a lot about our city beyond just architecture:  history; land-use planning; culture; urban revitalization. Buildings (old and new) are more than just bricks and mortar—they are a major thread in our cultural fabric.  The growth of our city tells the story of its people, and if we choose to thoughtlessly bulldoze “old buildings” for the sake of “progress” to build new structures in their place, then we will become disconnected from our past and permanently lose that part of our culture.  There are also the environmental and economic impacts of simply tearing down a building – the greenest brick is the one already in the wall!
London is rich with built heritage, and in general most people have an affinity for buildings with unique or interesting architecture.  Those who become members of ACO are typically those with a particular interest in heritage conservation, and end up speaking on behalf of buildings that can’t fight for themselves.
One of the biggest losses during the past two years was that of Camden Terrace. A true architectural gem, and a rare example of Victorian row-houses, this complex on Talbot Street was left for years to rot: it’s called “demolition by neglect” and unfortunately it tends to be effective in persuading cities to allow a building to be torn down instead of being restored. Cities such as London need to take a hard look at by-laws pertaining to vacant properties, but that’s for another blog. 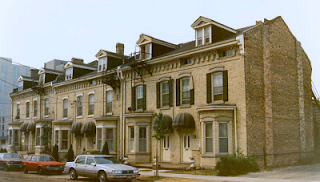 Camden Terrace in 1987.  (Photo courtesy of the City of London planning department.)
The loss of this building—the property is currently an empty lot full of broken iconic London yellow brick—really stung.  What’s worse is that the promise to build 30+ storeys on the land right away was not kept, and the viability of the project is still in question.  Camden Terrace will serve for a long time as an example of urban planning gone wrong. 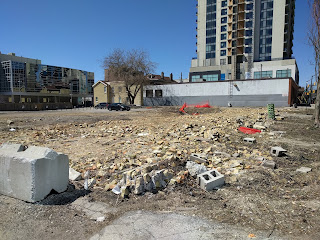 Camden Terrace on April 22, 2018.
Buildings of all ages give that tangible connection to distinguishable periods in our history, and by no means are meant to be placed under glass to never change for the rest of time.  Heritage conservation is about maintaining streetscapes while allowing for additions and new construction.  Doing the latter in conjunction with an old building is the most sustainable method of introducing a new building: reducing waste going to the landfill; retaining important cultural inventory; and better payback on the final building by way of more demand for units (even if it costs a little more up front).

One highlight of recent note is the acceptance to incorporate two historical barns into a new subdivision on the city’s northern border.  After advocacy from ACO London and others, the developer worked the clay-tile barns into the plans for the new subdivision.  They will be re-purposed likely for commercial use and will give a unique flavour to a new neighbourhood. 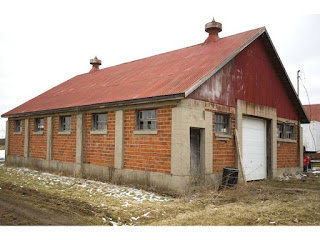 One of the barns at 660 Sunningdale Road East. (Photo from The London Free Press.)

Of course, there was much to celebrate during my two years as president.  2016 was the 50th anniversary year for the London Region branch, founded in July 1966 by four dedicated Londoners who wanted to see the Ridout Street complex saved from demolition.  50 years later, those buildings still stand and are in full use, currently as a private school.  It was an enormous honour to have served during this important milestone in our branch’s history. 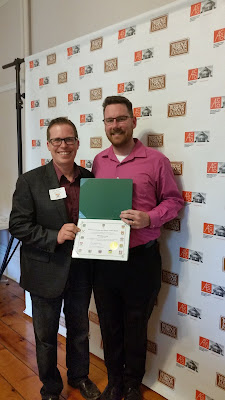 Receiving a certificate of congratulations on the branch’s 50th anniversary from the office of London North Centre’s Member of Parliament.
2017 was the sesquicentennial of Canada’s confederation, a year filled with reflection on our nation’s past.  Our branch was very active in promoting the history of our city that one experiences through its buildings, and as a society we must continue to value those connections as London continues to grow.

I look forward to serving another two years with ACO London as past-president.  The work is never done when you’re an advocate for something as vital as the shared cultural resource we call built heritage.