Skip to content
If you haven’t checked your mailbox since Friday, make sure you do so before the weekend finishes. You will find a pamphlet outlining some open houses coming up over the next week to learn more about the options being considered for London’s bus rapid transit (BRT) system. 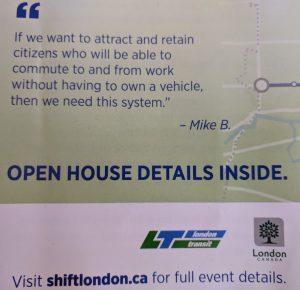 Back of the brochure delivered to households this past Friday.

On a personal note, I had the pleasant surprise to discover comments that I had made at a public information meeting in December about the need for rapid transit appear on the back of the pamphlet! Seeing this inspired me to further explain the importance of implementing this method of mass transit, and I’ll use our household as an example.
Our family has one car for two working adults, and we have a child in daycare. My wife takes London Transit to and from work most of the time and drops our daughter off in the morning, and I drive to and from work most of the time and pick our daughter up in the afternoon. While both of our workplaces are near a bus route, transfers downtown create long waits and only worsens during rush-hour traffic.
It normally takes my wife 50 to 60 minutes to get home on a roughly 10 km journey, when it shouldn’t be more than a 30-minute bus trip; however, heavier traffic and a meandering bus route through neighbourhoods double her commute home. She finishes work at five o’clock, but would have to leave work a few minutes early to catch a bus and get home by quarter to six, and typically has to wait 20 minutes after work to catch her bus to get home shortly after six. My commute of about 6.5 km would take 30 minutes by bus (it’s typically 12 to 15 minutes by car), but I would either arrive at work 20 minutes early or 5 minutes late; on the way home (I finish at four o’clock), I would leave 5 minutes early or have to wait 20 minutes for a bus, getting home at about ten to five. 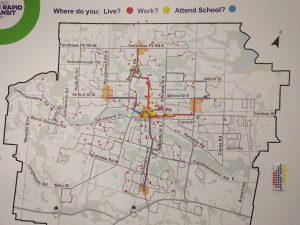 Map of where people reported to live, work, and go to school at the December 2017 public information centre for Shift.
We both have the goal of getting to and from work without the use of a single-occupied vehicle, and having dedicated lanes for bus rapid transit (therefore making the system “rapid”) will ensure that schedules remain punctual and reliable. People who want to take public transit only really ask for comfort and reliability: the major problem that has plagued London’s transit system for decades has been unreliable schedules — a bus that arrives early and leaves early at transfer points, for example, so in essence doesn’t arrive at all — and is a deciding factor for people to drive their car instead of using public transit, myself included. Not being assured that I would be home in time to pick up our daughter from daycare is a huge reason why I still drive to and from work.
Having the backbone of the system in rapid/reliable transit will speed up commute times and increase the efficiency of the feeder routes that cover the rest of the city.  Since the rapid lines will be every 5 minutes (during peak hours) or 10 minutes and feeders being no more than double the rapid line, people will be able to get around much quicker and with minimal transfer times.
Getting home earlier from work would allow us to spend more quality time as a family, and in my wife’s case would give her about three more hours at home in a normal week. A more reliable transit system will allow us to continue as a single-vehicle family; otherwise, we would have to explore adding to London’s congestion with a second vehicle, while also greatly increasing our household expenditures. We are only one family: multiply our situation by thousands, and the impact of having better transit will easily help young families reduce their need for a second vehicle — not to mention empty-nesters who want to downsize, single folks who would rather not own (or perhaps can’t afford) a vehicle, and a multitude of other family situations where reducing vehicle use is beneficial for them both financially and socially.
When we consider moving forward with the BRT, we already know that it will:
It’s a sustainable solution that we can’t pass up.