All right, everyone, now say it with me!  “It’s not how dense you make it; it’s how you make it dense.”

Good.  Now with that out of the way, let’s explore how we can have exciting new buildings in our city that have a positive effect on existing architecture, and more specifically heritage buildings.

By integrating heritage buildings into the design of new builds from the get-go as a foundation for the new construction, a city keeps its character while allowing for higher density.  Responsible and forward-thinking land owners will maintain the buildings on their properties right up until the time of construction, and throughout, in order to preserve the integrity of the existing structures. 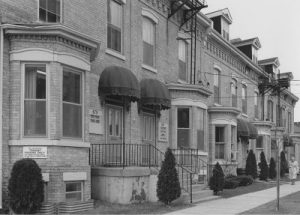 Camden Terrace in 1988.  Photo courtesy of the estate of Lois Marshall.

Lately in London, we have had quite the opposite, from the demolition of 505/507/511 Talbot Street to make way for another uninspired concrete monolith (think of the hideous Renaissance towers on Ridout Street North between King Street and York Street) to the pending destruction of 175/179/181 King Street (although thankfully 183 King Street will remain) for another 30-storey tower.

Now don’t get me wrong: we need a proper mix of high-rises, mid-rises, and low-rises in the downtown.  New buildings are always going to be required to regenerate and grow a city.  Making them the right density in the right locations builds a city inwards and upwards, which is what is needed instead of outwards and sprawling.  Urban infill is a good thing and a necessity; however, it has to be done with consideration for the existing built environment and adaptive reuse in the forefront, not as an afterthought.

Camden Terrace (479 to 489 Talbot Street) is under threat of complete demolition.
These row houses have a significant and rare form and style, designed by the renowned London architect Samuel Peters (click for short video on Peters and Camden Terrace).  This brilliant gem in our downtown core tells the story of how our city grew and evolved, and warrants a respectful integration with this infill development.  Instead, the developer prefers to tear the building down to make way for a 9-storey mixed commercial/residential building as the first phase, with plans for two towers (also mixed use) on the north (29 storeys) and south (38 storeys) as the second phase.  Plans also show a three-storey parking garage in the back.

I am a fan of the mixed use: it is ideal for a city where we want people to work and play all within walking distance of their home, which has huge benefits economically, socially, and environmentally.  The design of the nine-storey first phase can easily integrate the entirety of the original row houses, with appropriate modifications to permit the desired entranceway as proposed in the designs. 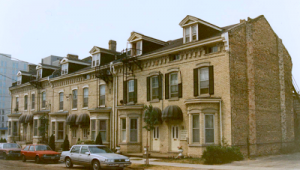 The London Plan aspires for no more aboveground parking, and rightly so:  parking in the inner core start to disappear with driverless cars and rapid transit, and therefore the people who are living and working downtown are less likely to own a vehicle.  The proposal has four levels of underground parking and three levels of aboveground.  In reality, the aboveground parking will become obsolete in the very near future and would be better use of space to expand the nine-storey construction: this keeps the nine-storey portion virtually unchanged (or potentially larger) and allows room for Camden Terrace to remain. Talk about win-win! The investment for the developer and the city will be huge if all phases are built: don’t we want this done right for ourselves and for future generations?

Adaptive reuse has become prominent recently with the Cornerstone Building, the London Roundhouse, The Cube, and many more.  Not only does it maintain a city’s character, it is also easier on the environment by not sending tonnes upon tonnes of building materials into an already-strained landfill site.

Camden Terrace must be given designation and maintained in situ, as any needed changes to the buildings can be considered through a heritage alteration permit.  In fact, the London Roundhouse remains in place and will have a tower built behind it: why can’t we do the same here?

Heritage needs to have a voice at the table, and be included from the beginning of projects impacting our shared historical buildings.  A mature city values its heritage.  Other mid-sized cities in Ontario have been willing and able to push the creative inclusion of heritage buildings into new developments of various size:  isn’t London good enough to have the same?  Shouldn’t we demand better for ourselves?