Skip to content
“The wrecking ball cometh.”
These words (apparently) bring music to the ears of eight members of London’s council, given that they voted against designation of 759 Elizabeth Street (AKA the “Carling Cottage”) as a heritage property at the November 10th council meeting, the winning decision in an surprisingly-close 8-7 vote.  A week before at the Planning and Environment Committee meeting on November 2nd, the committee voted 3-2 against designation, with those voting against using flawed logic to guide their decision, including red herrings like the condition of the roof and the outdated furnace as reasons to allow demolition.  The two voting for designation made great arguments for not demolishing the cottage, specifically the historical context of the building and the fact that its orientation predates the surrounding road network.  Not only that, but heritage designation does not preclude applying for a demolition permit. 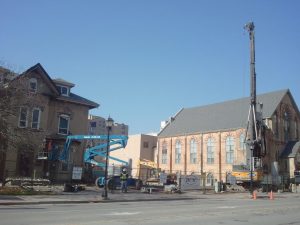 505 Talbot Street, at left, undergoes deconstruction after the demolition of 507 and 511. (Nov. 11, 2015)
This scenario has played out all too commonly with the current council:  we recently also lost three heritage buildings at 505, 507, and 511 Talbot Street (the building at 511 formerly home to The Shire pub) to be replaced with a very uninspiring skyscraper.  While I fully support intensification when it comes to new developments, councillors would do well to remember the following adage: “It’s not how dense you make it, but how you make it dense.”  Developing bland concrete blocks at the expense of cherished heritage buildings is reckless and irresponsible.  Unfortunately, only one councillor – Bill Armstrong – voted against the demolition.
To justify the demolition of heritage buildings and endure the resulting loss of history and culture, the structures replacing the existing must provide a positive net benefit to the community.  Unless plans for the new highrise include some beautiful architecture and mixed use, a net benefit will not be in the cards for the Talbot properties. It is certainly not the case at 759 Elizabeth where the developers are proposing to build a duplex in place of the cottage.

The Carling Cottage, as seen in the London Free Press on Nov. 2, 2015.
Now, the Carling Cottage may not be a grand mansion or the home of anybody famous, but it provides an impeccable example of vernacular architecture.  The cottage was built in the “Regency” style, as outlined in this description of the property from the 2010 MLS listing (462279):

A unique Ontario cottage purchased by the owners great grandfather from Sir John Carling at the time of the Wolsey Barracks purchase in about 1878. “Carling Cottage” as it is known, is one of the first brick homes in the district built in 1827. Initially it faced Adelaide St which was the concession rd at the time and the carriage house was located on Oxford St, now demolished. It has been maintained in the style period having original pumpkin pine flrs, fireplace, large 6×6 Georgian windows, many original glass, however the whole house has been refurbished, which inc. the fireplace, wiring, new plumbing, shingles(07) new sub-floors (kit, bthrm and mudrm) and the large covered front porch (30.8ft x 6.2ft) to its original design where you can sit in one of 4 black rockers. If you appreciate a perfect peaceful piece of London history this is the cottage for you. Large 8 x 12 storage cottage also located on 78 x 150 ft lot(exclude chandelier in DR)

This property is steeped in history, originally belonging in London Township.  Charles Henry and his family lived there, on lands owned by Sir John Carling of brewery fame, to work the farm. The house’s front orients toward the forks of the Thames, which would have provided a wonderful view over the farm fields leading into the town of London. Years passed and the city grew up around this place as it endured for over 150 years.
Preserving vernacular buildings is just as important as keeping Eldon House and other large, elaborate homes: we don’t save nearly enough buildings that represent the working-class person of the day.  A good example of this is the number of plantation houses saved and restored as compared to the slave quarters, even though the humble slave quarters were lived in and represent the lives of many more people.  We should pay special attention to and cherish those rare small buildings from the past that provide insight into the lives of everyday folks.
I applaud the seven councillors who voted to save the Carling Cottage, and thank them for their serious consideration of this important home.  The members of the community who supported keeping the house intact also require recognition for trying to conserve an important property.
Everyone needs to know that the greenest building is the one already built. Unfortunately, the demolition equipment has arrived and deconstruction is expected to begin tomorrow (December 3), so we must bid farewell to the Carling Cottage.  Maybe you can pick up a piece of history from the rubble and pay tribute to the past inhabitants.